WP Engine Review:Only focus on wordpress, is it worth the money?

If you are looking for a quality wordpress company. And you happen to meet some of the following characteristics:
-Medium and large publishers
-WordPress sites that mainly rely on online sales
-Fast-growing startups
-Professional web designers and developers
Then please choose WP Engine now. This is the only company in the industry that only focuses on wordpress. Their years of persistence have made this single product a good reputation. If you have never heard of it, please take 8 minutes to read this article. This will enable you to find a successful partner.

About WP engine?
WPEngine is one of the biggest names in managed WordPress hosting.
WPEngine was founded in 2010, it is not one of the early entrants in this market, but they do occupy a leading position in this niche industry. engine
Unlike other hosting companies, WPEngine focuses on one thing, and only one thing:
WordPress.
Essentially, they concentrate all resources and energy on the WP framework, hence the name.
WPEngine is supported by an award-winning team of WordPress experts. Today, the company has more than 250 employees and is headquartered in Austin, Texas, but has offices in San Francisco, San Antonio, London, and Limerick (Ireland) Place.
One of the ways we measure the stability of a company is actually based on the funds the company has received.
Nearly US$290 million has been raised over the years, and the latest round was raised as much as US$250 million from the venture capital firm Silver Lake in January 2018. You can rest assured that this company is going public.
There are many reasons for being able to raise so much funds:
WPEngine is one of the largest WordPress hosts
It has a very successful productization platform-WPEngine digital experience platform
It is estimated that the company’s annual recurring revenue is 100 million U.S. dollars, has more than 70,000 + 120,000 customers (up 30% from the previous year), and its valuation is at least about 500 million U.S. dollars
WPEngine powers about 5% of Internet access-this is an important part of the Internet
Trusted by big brands such as Under Armour, Trend Micro, Thomson Reuters, Hello Fresh and other large websites.
So yes, these numbers can definitely defend this company.
Although there is more competition in the hosting business than in any other niche market, it is clear that WPEngine is the market leader here, with excellent brand recognition, cutting-edge features, and a leading platform for various businesses (including corporate sectors) .

WP Engine features
–Super high-performance WordPress hosting
WP Engine has servers in the United States, Europe, the Middle East, Africa, and Asia Pacific, so your servers can be close to your customers. This greatly speeds up the delivery of dynamic content.
The company’s EverCache technology automatically handles page, database, and object caching, so you don’t need to fuss about any caching plugins.
Use PHP 7 and HTTP/2 and a fully managed global content delivery network to get better SEO returns and conversions.
–Aim for scalability
Unlike most hosts, WP Engine does not restrict your data transfer. This means you don’t need to worry about providing large images, videos, and files.
WP Engine has first-class hardware and is constantly improving to provide the best service possible.
In addition to excellent hardware, the company also provides hardware quotas to ensure that sites hosted on its network can easily cope with large traffic peaks. When most hosts have difficulty keeping up, WP Engine calmly handles the traffic.
–Safe, safe, safe
Clustering and redundant configuration, as well as active and multi-layered security measures, keep your website up and running.
WP Engine experts not only prevent the attacks that every website usually encounters, but they also ensure that WP Engine sites are more resilient to WordPress-specific attacks.
WP Engine will automatically scan for malware, and the company guarantees that if your website is hacked, the team will fix it for free.
–Amazing development tools
WP Engine’s development tools really set a very high standard. Our favorite is the easy-to-use development, staging, and production environment.
An isolated development environment for testing, as well as automatic backups and WordPress core updates. The real-time activity log provides visibility into your account.
In addition, one-click restore points and Git version control complete WP Engine’s amazing combination of development tools and techniques.

WP engine pricing: some changes in 2021
You can find all the pricing details for WP Engine on its pricing page, so this topic doesn’t deserve too much attention. However, it is worth a brief introduction, because in 2021, WP Engine made some cha 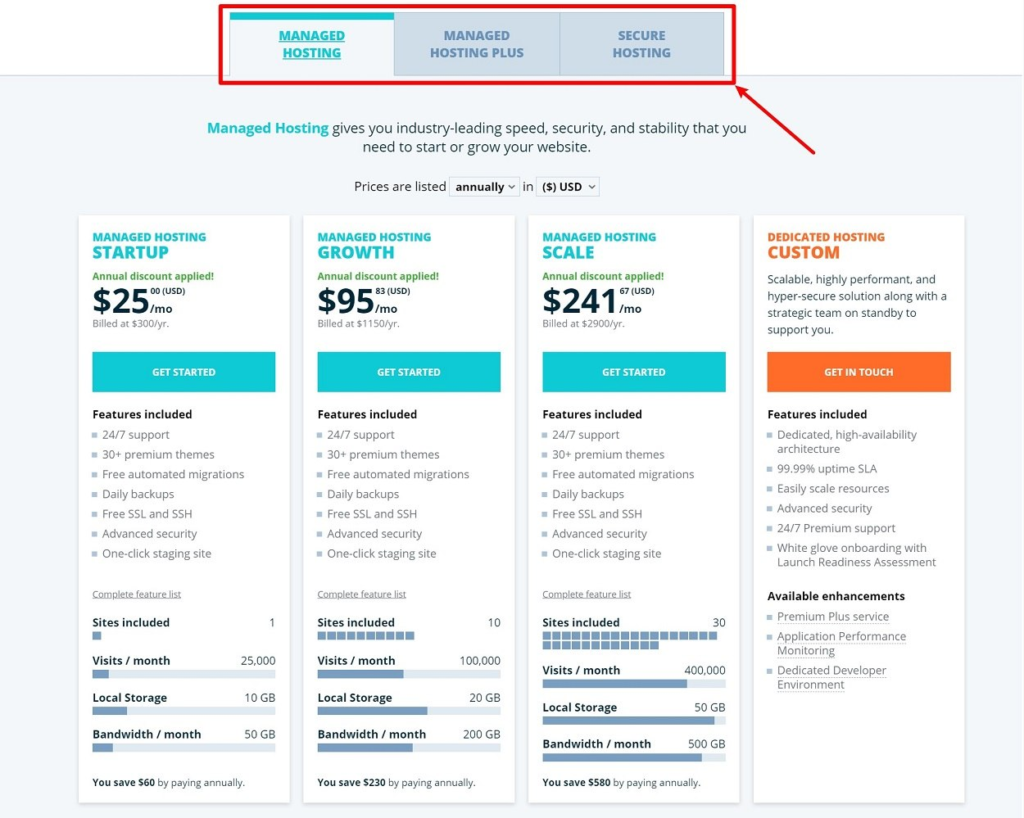 All levels have exactly the same site and access restrictions between their plans-the only difference is those extra features.
If you are familiar with WP Engine’s pricing, it seems that they bundled some previously separate add-ons and advertised them better on their pricing page. The “Plus” plan looks like it adds a smart plug-in manager, while the “Secure” plan adds Global Edge Security and plug-in updates.
Which plan should you use? Most people have no problem with regular hosting (the cheapest), which WP Engine has provided for years. AI-based automatic plug-in updates and rollbacks are a very useful feature-but you need to decide if it’s worth paying you about $50 or more per year.
Secure hosting is a good choice to give you peace of mind on mission-critical sites, but as long as you implement WordPress security best practices, most people don’t need these features-you can learn how to implement these best practices in our WordPress security Confident course

The main thing you hear from WP Engine critics is its high cost. Few people have any real doubts about the actual product of the host. If you are running a small website or blog, you may not need most of the WP Engine features and functions.
However, if you have a large and medium-sized website with tens of thousands of monthly visits and a rapid growth, you may need to seriously consider using WP Engine. This host allows you to focus on your core business while giving you peace of mind because your website is available, fast, secure, and ranks on Google.